All example movies of multi-body deformable fluid–structure interaction were simulated with the 2D lattice Boltzmann based reference map technique (LBRMT).

Sedimentation and Floatation of 514 Solids

All 514 solids (shear modulus G=4) are under gravity. The upper half is set to be heavier than the fluid, the lower half lighter: naturally, the solids would want to switch their positions. The LBRMT can capture the fine details of deformable solids, as well as model the different physics of sedimentation and floatation without any modification to the code.

Four flexible rotors (shear modulus G=24) are anchored at their center. A rotational spring force is applied to each rotor, leading to twisting and bending of the solid.

[Still under construction. More details will be added. Stay tuned!]

Abstract: This thesis presents a hybrid fully-Eulerian numerical method for fluid–structure interaction (FSI) simulation. The new method (LB-RMT) combines the reference map technique (RMT) and the lattice Boltzmann (LB) method to simulate the interaction between the solid and the fluid, and incorporates an extrapolation zone to update the solid-fluid interface. It simplifies the inter-phase coupling by taking advantage of the two Eulerian-based methods: the RMT permits both the solid and the fluid to be represented on a single fixed mesh, and the LB method uses a mesoscopic probabilistic view of particle motion to simplify macroscopic hydrodynamics update. The LB-RMT also provides a novel approach to mesoscopically simulating solid deformation. Examples consisting of a quasi-incompressible Navier–Stokes fluid with compressible neo-Hookean solids show this method is flexible and robust in handling standard fluid–structure interactions and deformable solids with sharp corners bending and twisting in fluid. A convergence study demonstrates the LB-RMT is of second-order accuracy, improved from the previous first-order RMT. The method can be extended to handle dissolving solids and multi-species cases like fluid–solid–gas simulation in two and three dimensions. 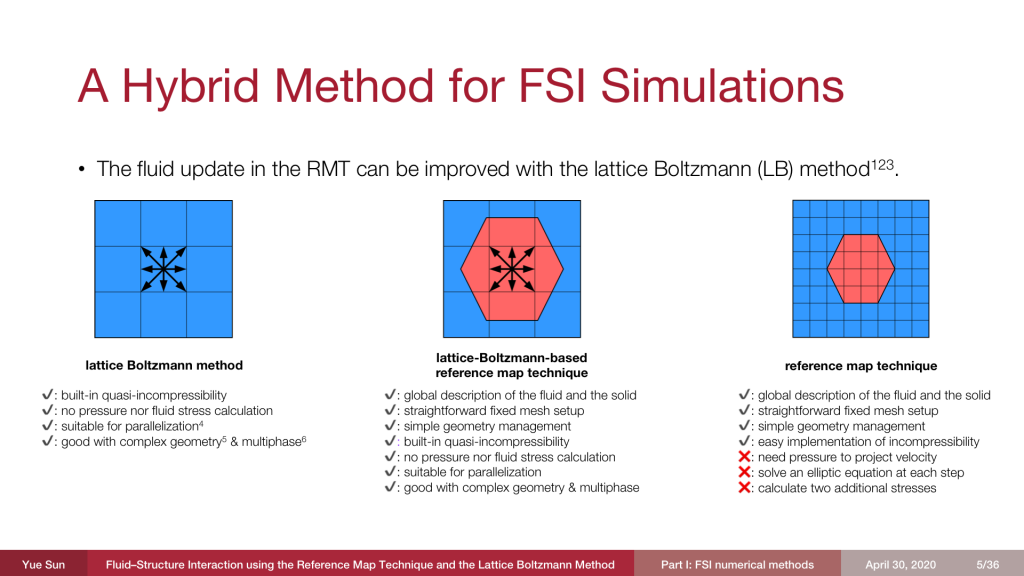